We started “traveling” again this month! That is not to say we haven’t been a few places outside the city of Sacramento during the pandemic. But vaccines, masks, and declining infection rates finally made us feel like we could take an extended trip. So along with our good friends Eileen and Stan we flew to Las Vegas, rented a car, and set off to tour four National Parks—stopping in Sedona and concluding our trip in Phoenix with a visit with my brother Joe and his wife Karen.

It was strange to drive so many miles (close to 2000), stay in motels, eat in restaurants, and stand in long lines again. It felt a little bit like learning a new skill. The parks (Zion, Bryce, Mesa Verde, and Grand Canyon), were beautiful AND full of visitors. Staffing in the parks, local hotels, and restaurants was sparse. The trip, while not without its challenges, was a joy. In all this I recognize the privilege I possess as a vaccinated retiree in the United States.

There are so many things I could relate about this trip, but one particular thing has stayed with me. Not what we saw. Not what we heard. But the people we didn’t see. And the voices we didn’t hear.

Let me explain. Last time Lena and I (with Anna) visited Mesa Verde, the site of ancient Native American cliff dwellings, was close to 40 years ago. We were told then that the dwellers in these houses were called the Anazazi. It was said that these people mysteriously disappeared without a trace from this site in the late 13th century AD. I’m not actually certain all we were told about these native people when we visited Mesa Verde our first time, but what I know is that the story is clearer to me now.

While the people who populated Mesa Verde did indeed leave there in the late 1200s—they did not disappear. The descendants of these folk are the people of many tribes in the the American Southwest who live not that far from the Four Corners region where Mesa Verde National Park is situated. They can be found in the 19 pueblos of New Mexico, the Hopi Tribe of Arizona, and also among the Navajo, the Ute, and many others in this area of the country. Today these ancient cliff dwellers are rarely referred to as “Anasazi.” This word is a Navajo one that means “ancient ones,” or even “ancient enemy,” and is not a name these people chose for themselves. Most of those who are descended from the people of Mesa Verde prefer the term “Ancestral Pueblo People.”

Which brings me to my thoughts about unheard voices. It is surprising how easily voices can be overlooked or unheard in our world. (Think of how we are only now paying attention to slave narratives in our nation.) It is interesting that the word used to describe one people does not even come from their own language. It is amazing that much of Mesa Verde was brought into national awareness by rancher and amateur explorer Richard Weatherill rather than the descendants of those who lived there. It is interesting how much attention we have paid to archaeologists and how little we have paid to people native to the area.

I was encouraged by a ranger who served as our guide into one of the dwellings called the “Mug House.” While he was not a Native American, he was very respectful of the site and reminded us of its sacred nature to the Pueblo people. (He told us that those who once lived in it “were still there.”) He shared stories he had learned on tours of cliff dwelling sites from Native American descendants of the Ancestral Pueblo people. He gently shared that when he served as a guide to Pueblo people, his primary task was to listen to their stories and perspectives.

I grew up through my adolescent years in the Southwestern United States. I saw store after store full of Indian arts and crafts. We bought various items and treasured them in our home. I was aware that names of many parts of our local landscape came from various American Indian languages. I knew that many Native American people were part of my community. But I have no memory of ever having a substantive discussion about Native American life, culture, and history with someone who lived it. Even on this trip, my encounters with Indian people were few—a grocery store clerk, a front desk person at our hotel, a book store manager, or someone selling crafts. Tourist sites on Indian lands were closed due to the devastation that Covid 19 has caused in their nations, and so we were even further removed from Native American experience.

Something was missing for me on this trip. That missing thing was the voices and lives of Native Peoples. I wonder if that hasn’t been missing from my life (really from all our lives) for a long time. I’m not sure where to go with all this. I just know that there is much to learn and worlds I still need to explore. I want to listen. I want to meet new people. I want to honor and learn from their stories. I suspect my own life would be richer for it. I suspect our communities would all be more whole if we practiced this deep listening.

There are many voices that come to us in our lives. Some are quiet. Some are loud. Some are controlling and dominant. Some are subtle and inviting. Some seem to reflect the shared beliefs of the crowd. Some are the pleading voices of the few.

But some narratives are passed by or avoided. Those without much wealth possess precious wisdom. Power is not the ultimate good. Our children are our best teachers. God is bigger and more loving than you think. These are the counter narratives. These are the voices of people who walk to a “different drum.” These are the stories often heard only on the margins.

These narratives are all around us if we choose to listen. And this listening is truly a spiritual practice. As a man how do I listen to the voices of women? As a person of wealth how do I hear from those who live in poverty? As a Christian how do I understand the lives of Muslim people? As a North American, can I think broadly enough to connect with a person from Guatemala? As a white person, can I make sense of the history and life of a Black person in this nation?

So here is the practice. In a space and time when you feel you have been invited to do so, ask another person to tell you their story. Welcome their perspective and insight without interrupting, correcting, or asserting your own experience. Listen. And let there be silence. Listen again to the narrative of their life. And again. And again. And again. Perhaps if you do this enough, you will have truly heard their narrative and affirmed their personhood and life. And if you are really blessed—you will be transformed as well.

About Me and this Blog… 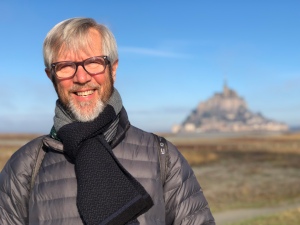 I’m Jim Zazzera.
There are a lot of things I used to be and do. These days I’m reinventing and discovering. I wanted to write something I could share. These are a few of my thoughts about travel and spirituality. (You might consider reading the first entry, “Disorientation as Life Practice,” if you want to understand what I am up to.)